Polonnaruwa is a city located in the North Central Province of Sri Lanka, is known as the second kingdom of ancient Sri Lanka.

Gal Viharaya is an ancient temple in Polonnaruwa which also known as Uththararamaya. Meaning of Uththararamaya in Sinhalese is “Uththara – North, Aramaya – Temple” (Temple by the north side). This temple was built by king Parakamabahu (1153 -1186) in Polonnaruwa Kingdom time. There are two seating Buddha statues, one standing statue and one statue in Parinirvana Manchakaya can be seen here. All the statues are made from a single huge granite rock.

This is one of the seated Buddha statues, is 16 feet in height. 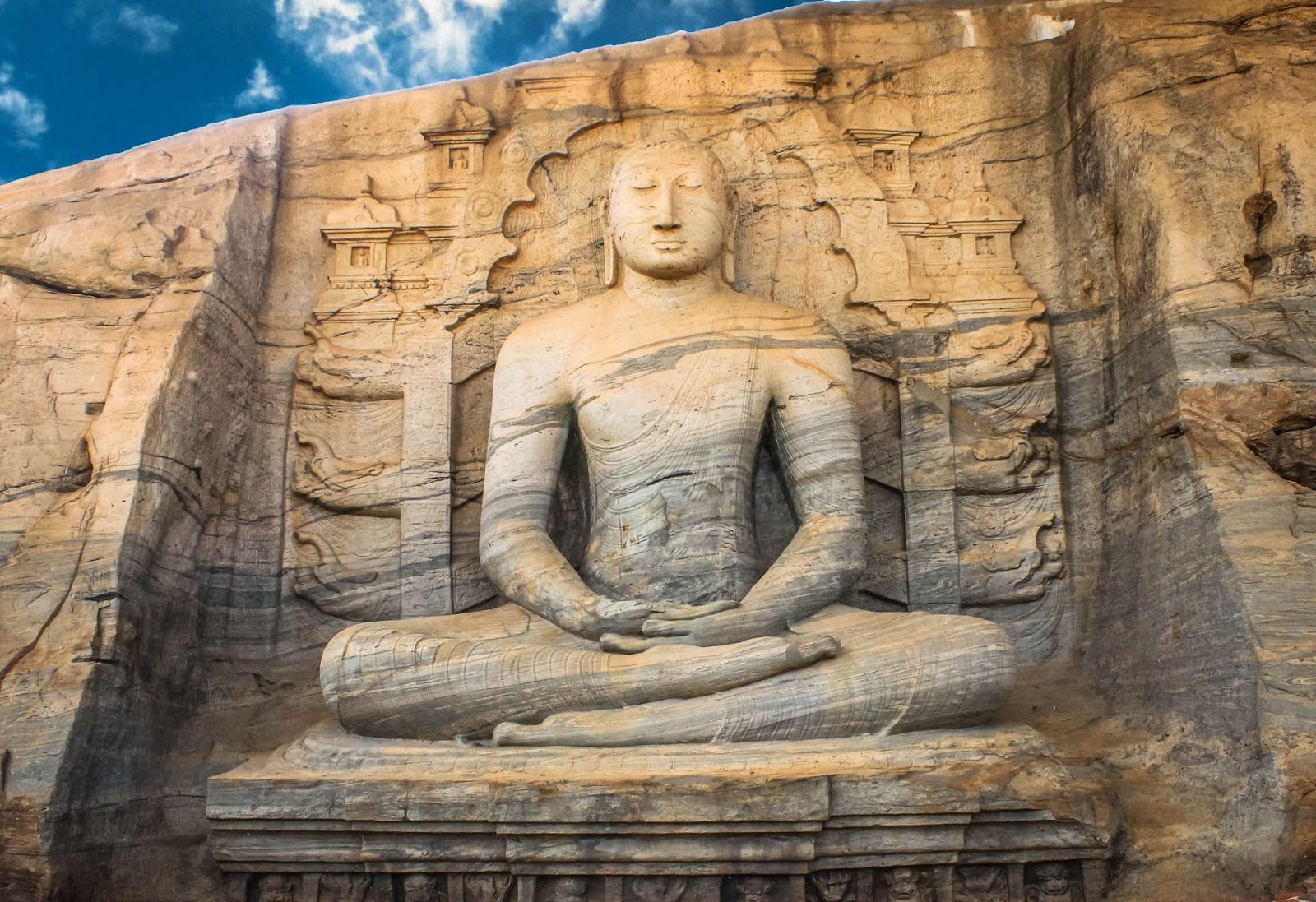 This statue is located in a man-made cave named ‘Vidyadara Guhawa’. 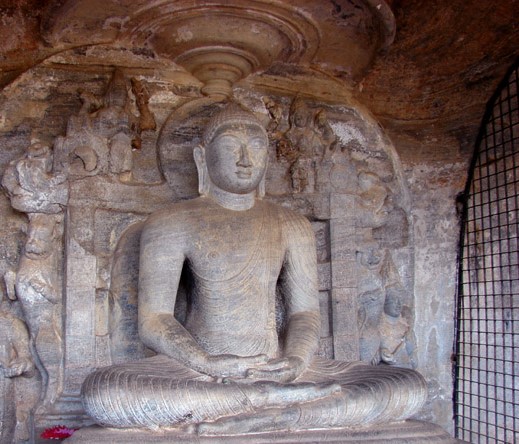 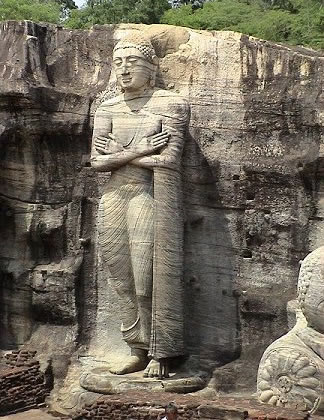 This is a 14m long statue. This Buddha statue is made as one foot is slightly withdrawn from the other, to differentiate the parinirvana state from the normal sleeping pose. 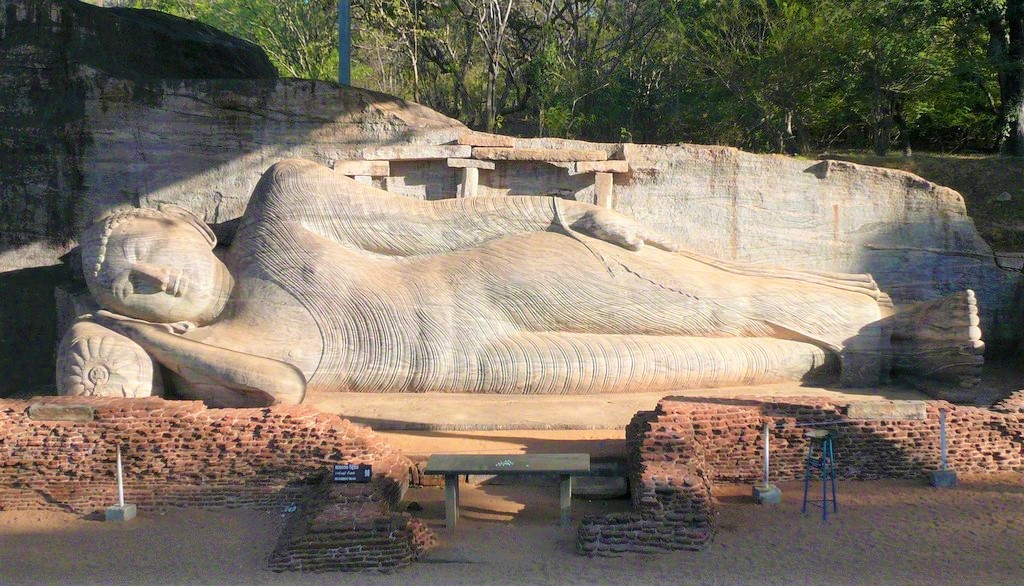 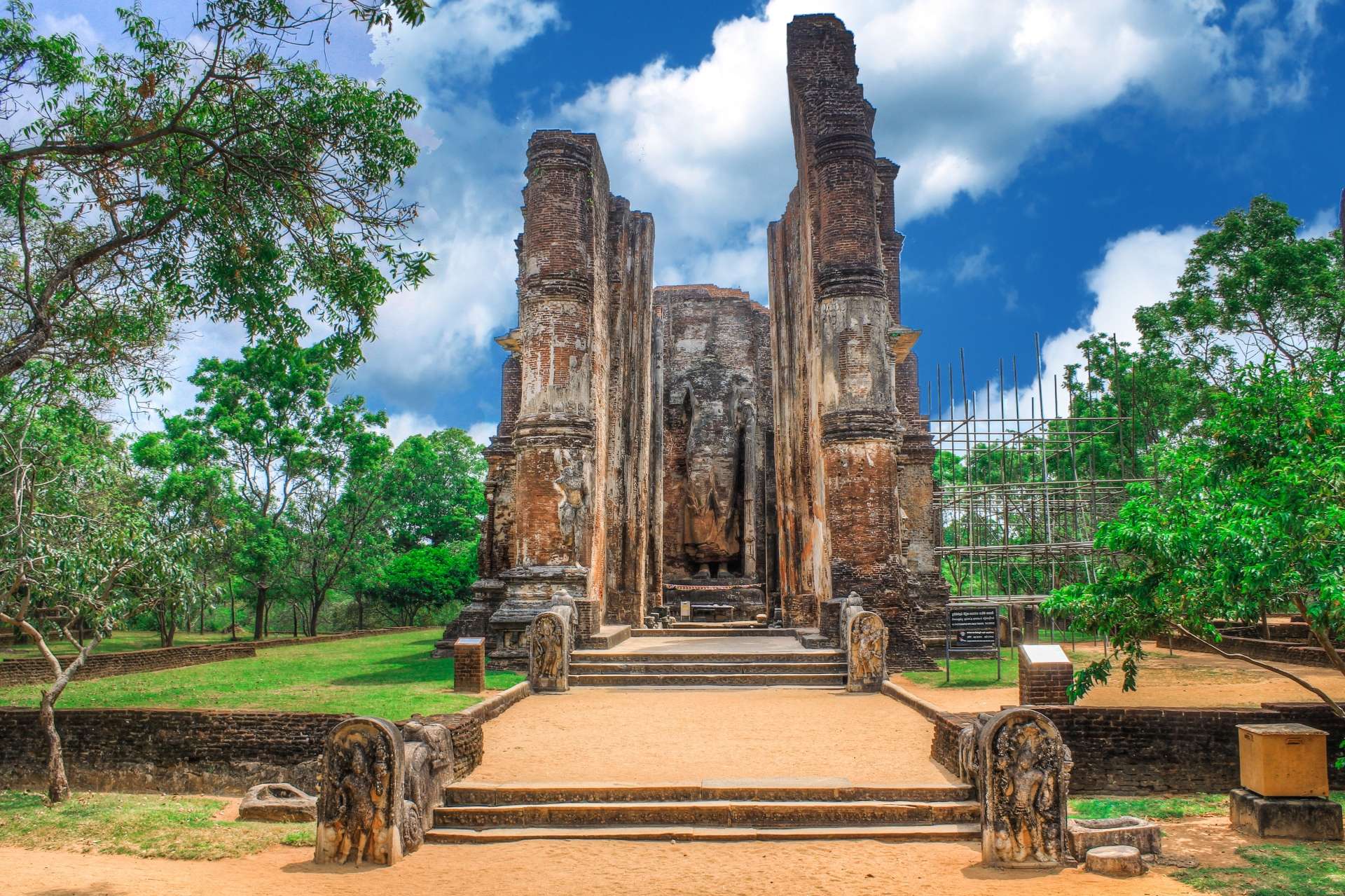 This vast water reservoir was built by King Parakramabahu. What we see today as the Parakrama Samudraya is only a part of his original creation. Parakrama Samudraya originally consisted of five large reservoirs separated by smaller dams to reduce the pressure on the main dam. Many smaller tanks were built around the main tank to feed these primary tanks and to take excess water. Today, the dam of Parakrama Samudraya is 14 km in length and 12.2 m in height. The body of water covers 5350 acres with an average depth of 25 feet. Over 18,000 acres of paddy land is supported by this reservoir.

This was built by king Parakramabahu and later re-constructed by king Nissankamalla. There was a stupa in the centre of the vatadage with four Buddha images facing the key directions.These Buddha images are different from what is normally found, because the curly hair is not visible on the head and the robe also flat. The roof of the vatadage had been supported by two rows of stone pillars around the Stupa. In the centre of the complex are the ruins of the Royal Palace of King Parakramabahu. It had been a massive wood and stone structure. The Palace was 7 stories in height and said to have 1000 chambers with a floor plan of 31m by 13m. The upper floors were of wood. But now only visible walls of thick over 1 m & 9m height. Inside the building there are parts of melted brick walls which caused by intense heat, since the building was set fire by Tamil invaders at the end of Polonnaruwa era. Around the main palace there are remains of more buildings where the ministers, solders and servants lived. 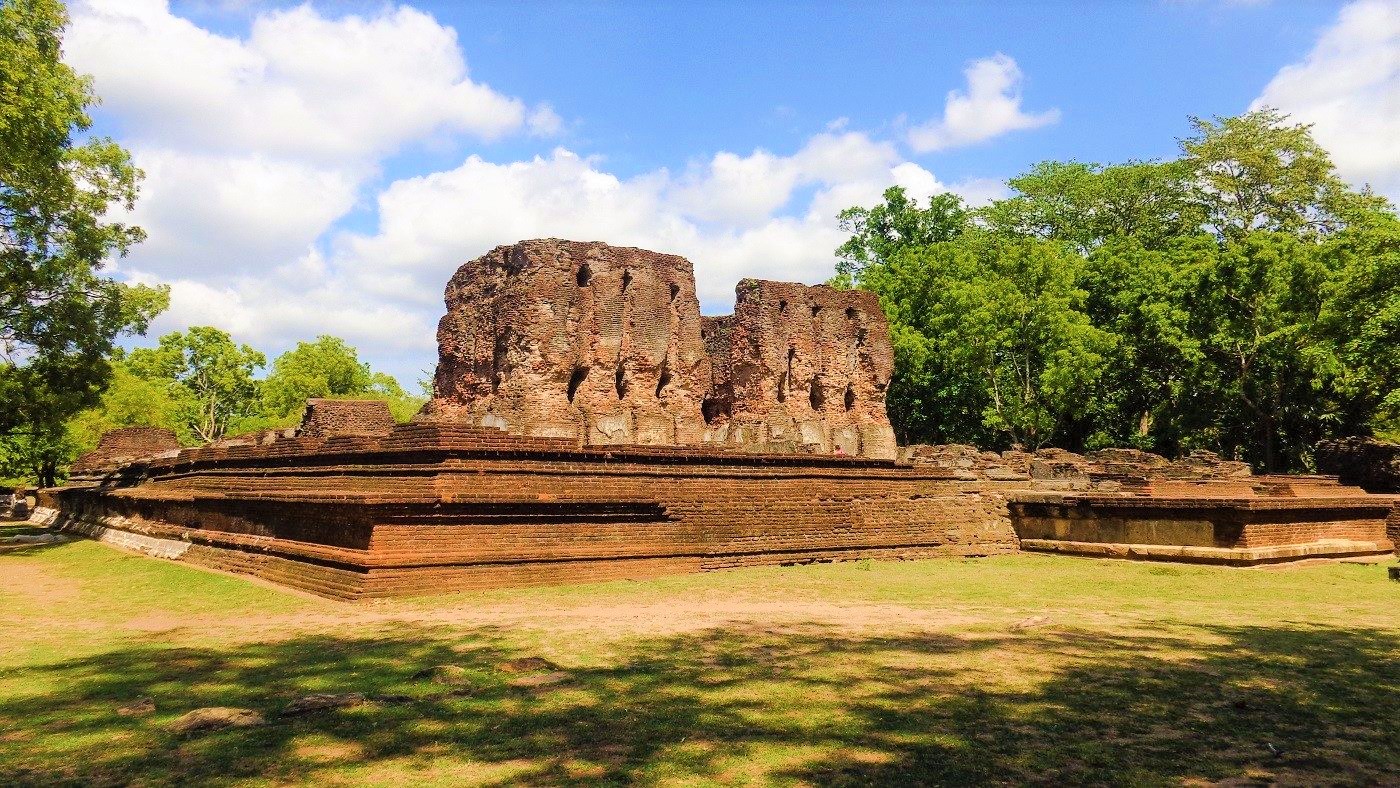 Ruins of the palace of king Nissaankamallacan be find close to the shore of the great man-made lake. This includes a royal bathing pool at south of the palace. The king’s council chamber also can be seen here. The names of the king’s ministers also can be seen carved into the pillars which supported the chamber roof. 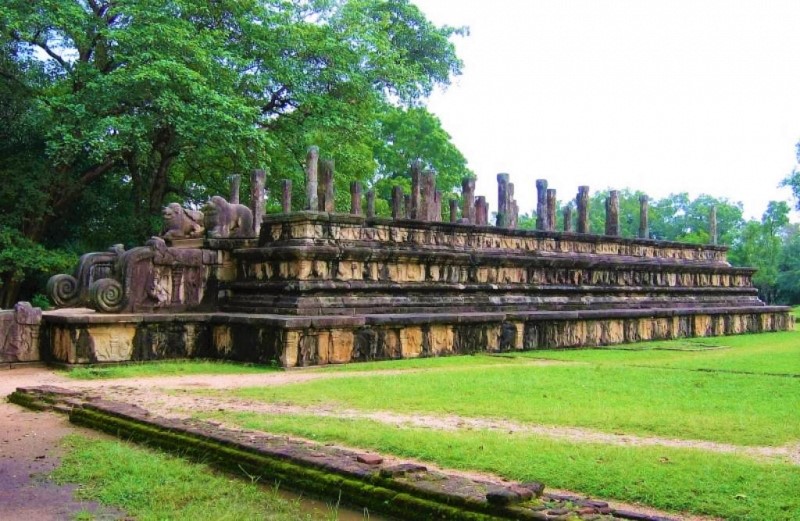 This is located in the Polonnaruwa Dalada Maluwa, where the Tooth Relic of Load Buddha was kept in Polonnaruwa period. King Nissankamalla used to come and listen the Pirith Chanting here. This is surrounded by a railing (fence) which was done with stonework. Entrance is from the east side with a stone doorway. There is a stupa in the middle of the stage which was done with stones. There are 8 stone columns on the stage around the stupa. Height of each column is around 8 feet. 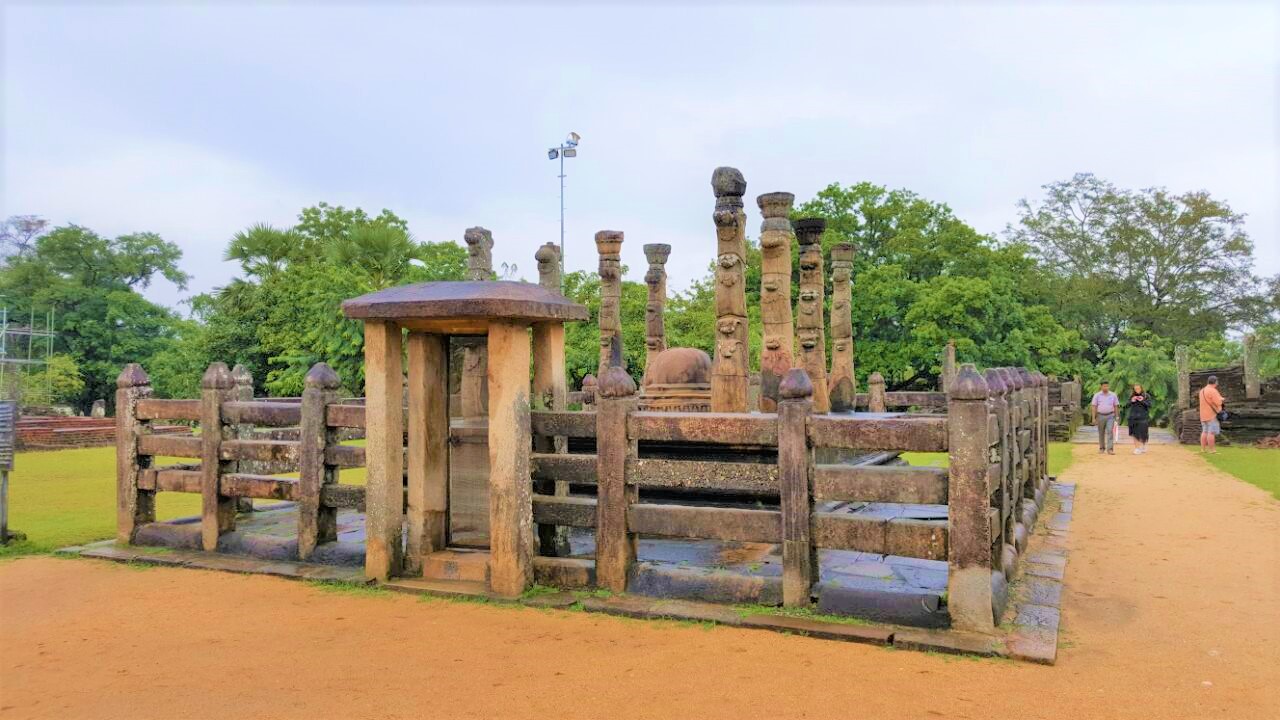 This was constructed in the period of King Nissankamalla. It situated directly north of the Vatadage. This also used to keep the Tooth Relic of the Buddha. The Hatadage was built using stones, bricks and wood. This was a two-story structure, but the upper story has been destroyed now. Three Buddha statues carved out of granite rock can be seen here. Hatadage is surrounded by a stone wall of 37 m long & 27 m wide. On the southern side, there is a doorway decorated with stone carvings. The main entrance to the temple also decorated with stone carvings and a ‘Sandakadapahana’ is directly in front of it. Another smaller doorway is placed on the eastern side. 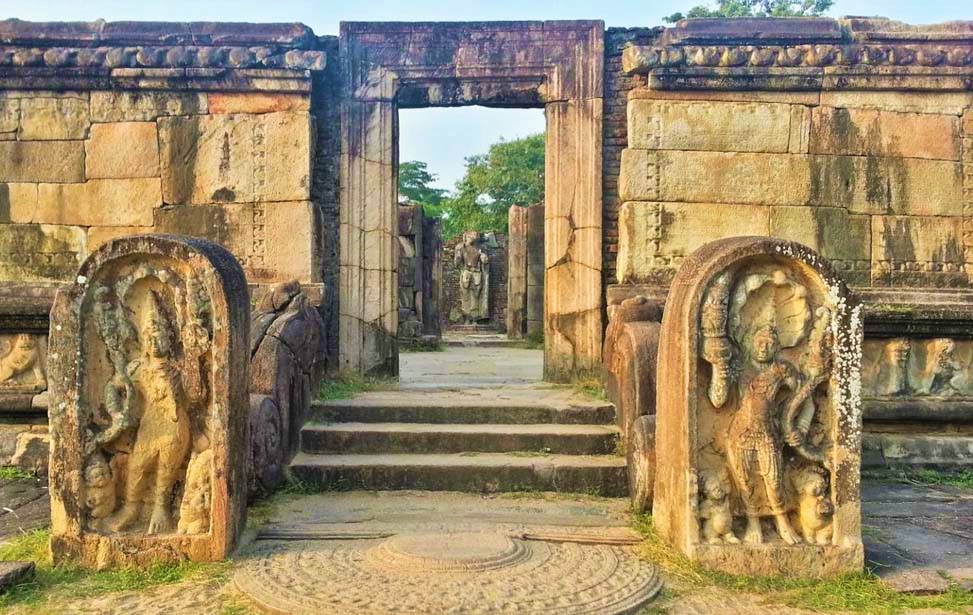 Stone Book is located east to the hatadage. Gal Potha used to record Buddhist texts and royal genealogies. Achievements of kind Nissankamalla also recorded here. It is a 9m stone carving of a palm leaf book. 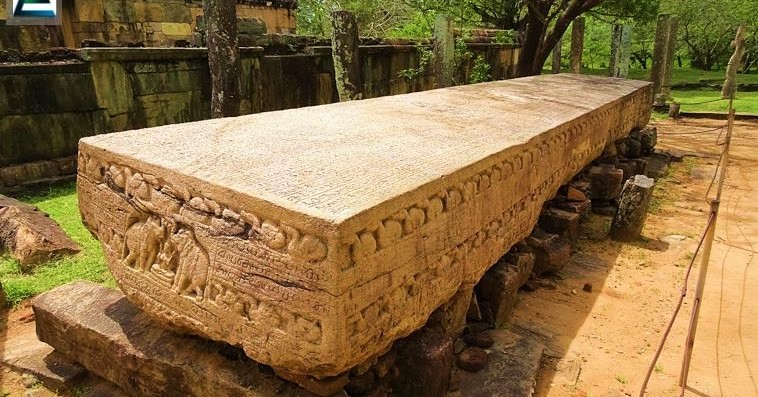 This is the largest stupa in Polonnaruwa, 55m in height. 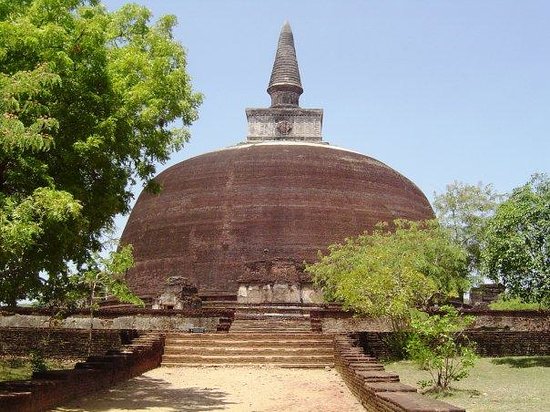 This was the meeting hall of the Buddhist monks of the monastery complex.

This stupa was constructed by ‘Subadra’ queen of king Parakramabahu. This large stupa’s whitewashed plaster has survived seven centuries of abandonment to the jungle between the collapse of the Polonnaruwa kingdom . This stupa was rediscovered in the 19th century by the British. 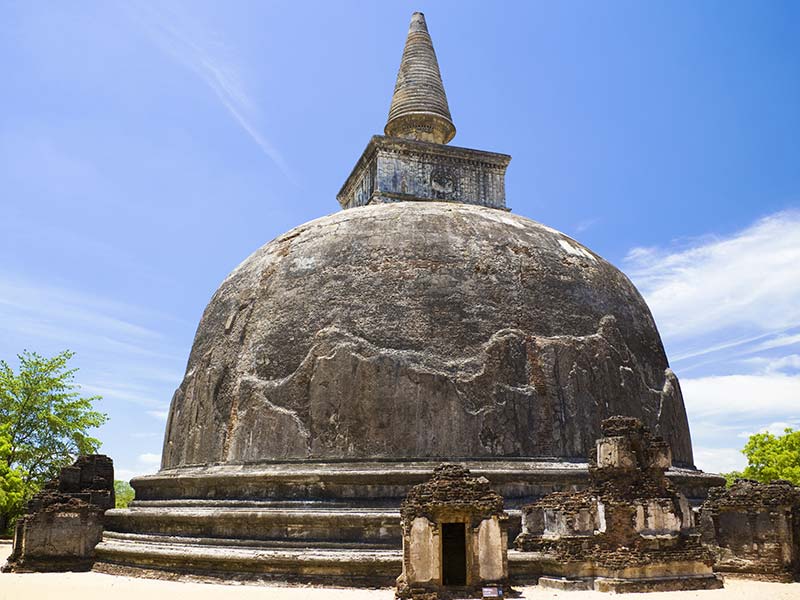 This gigantic uncompleted Stupa has been built by king Parakramabahu using the labour of Tamil prisoners brought from India when he attacked the Soli Kingdom in South India. For some reasons he was unable to complete this. At a later stage, a smaller Stupa has been built upon the uncompleted semi-spherical structure. If this stupa had been completed this would be 186m tall and would have been the largest Buddhist monument built by man. Circumference of this stupa is 650 m. Stupa was planned like this because the king wanted this monument to be seen from India. Today this massive stupa is only a large hill overgrown with trees and  there is no indication of this hill being a stupa other than a part of 3 outer rings of about 10m in length. 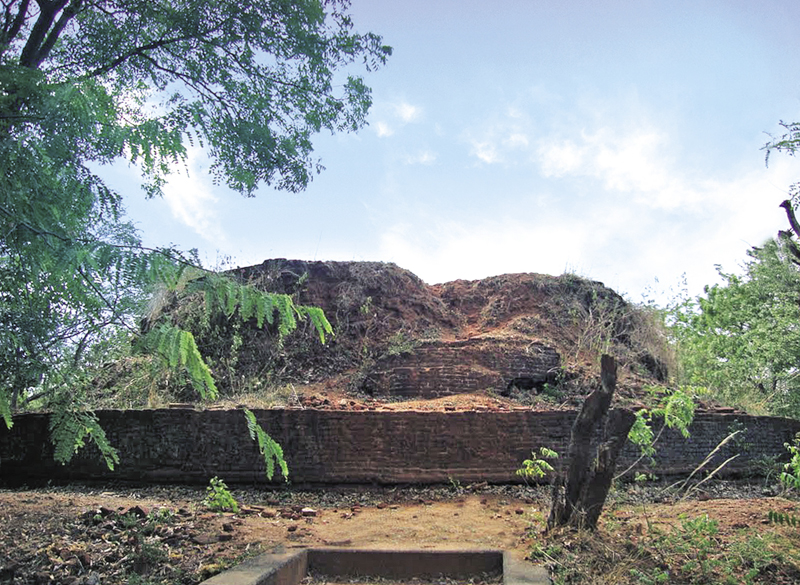 Statue of king Parakramabahu I

Height of this statue is 11 feet and 6 inches. The historians and the archaeologists have not confirmed its identity to date. Some refer to it as the statue of King Parakramabahu the Great because its closeness to one of his major irrigation works. Others refer it as Rishi Pulasthi’s statue. 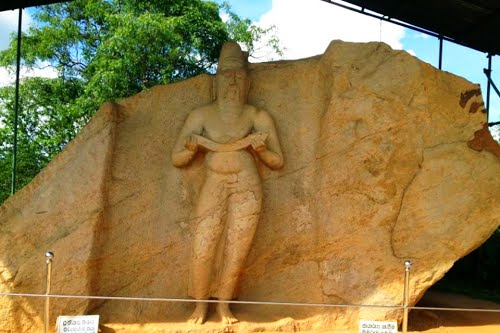 This was built by King Parakramabahu as a part of the Jethavanarama Complex. Since the large Buddha statue which can see here has been curved in 3 places, this statue been given the name ‘Thivanka’ (Meaning of Thivanka is ‘three curves’ in Sinhala). The Original Buddha statue was 8m in height. But today a part of the statue above the head has been destroyed and the height of the statue as at today is 6.6m. The building is 133 feet long and 67.6 feet wide. The walls are 7-12 feet thick . The inside walls of the building has been decorated with frescoes, showing the Jataka Stories (prior births of Buddha before enlightenment). The entrance to the building consists of two guard stones and two “Korawak Gala”. 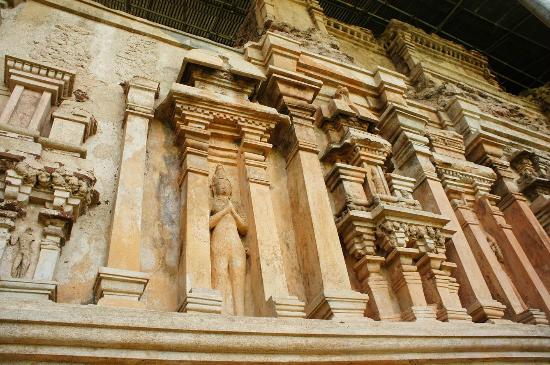 This is a pyramid shaped, seven storied building which is an unusual shaped stupa. It is said that similar shaped stupas can be seen in Cambodia and Siam. It is thought, this has been built for the Cambodian soldiers who were working under the king, as a place of worship. The building has four entrances from four sides. There is a stair case to reach the upper levels. The person who built this, the original name of this or the purpose is still a mystery.

Lotus Pond has been built in 12th century. This elegant pond was made similar to eight petals of the lotus flower, with four tiers. 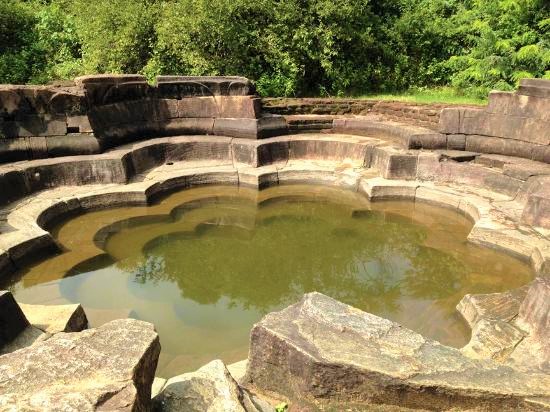 Kumara Pokuna (The pond of the Prince)

This pond is attached to King Parakramabahu’s palace and had been used for royal bath. This was built in shape of four tiers. Two dragon shaped gargoyles in two sides of the staircase led water into the pond,conducted through underground pipe lines from the canal nearby. A stone water lock on the east side of the pond has been used to exit the used water. The Pavilion which can see today near to the pond was the changing room those days. It is also believed that there were trees and flower plants grown in and around this garden pond. It is mentioned that 3 varieties of jasmine and red and blue lotuses were planted here. 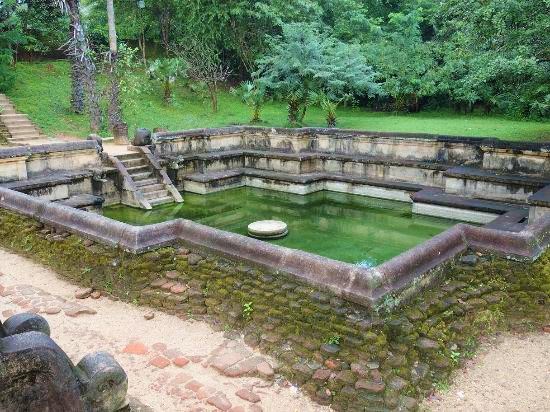 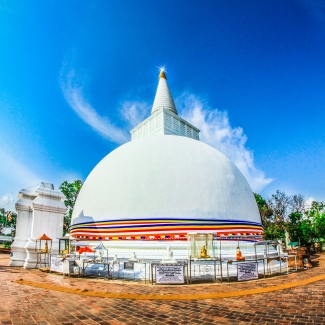 This was the meeting place of the ruler’s ministers. This is located near to King Parakramabahu’s palace. At the entrance there are two flights of steps with moonstones. It is said that the acoustic of the council chamber was so good and even king could hear the sound of ministers standing at the far end of the chamber. 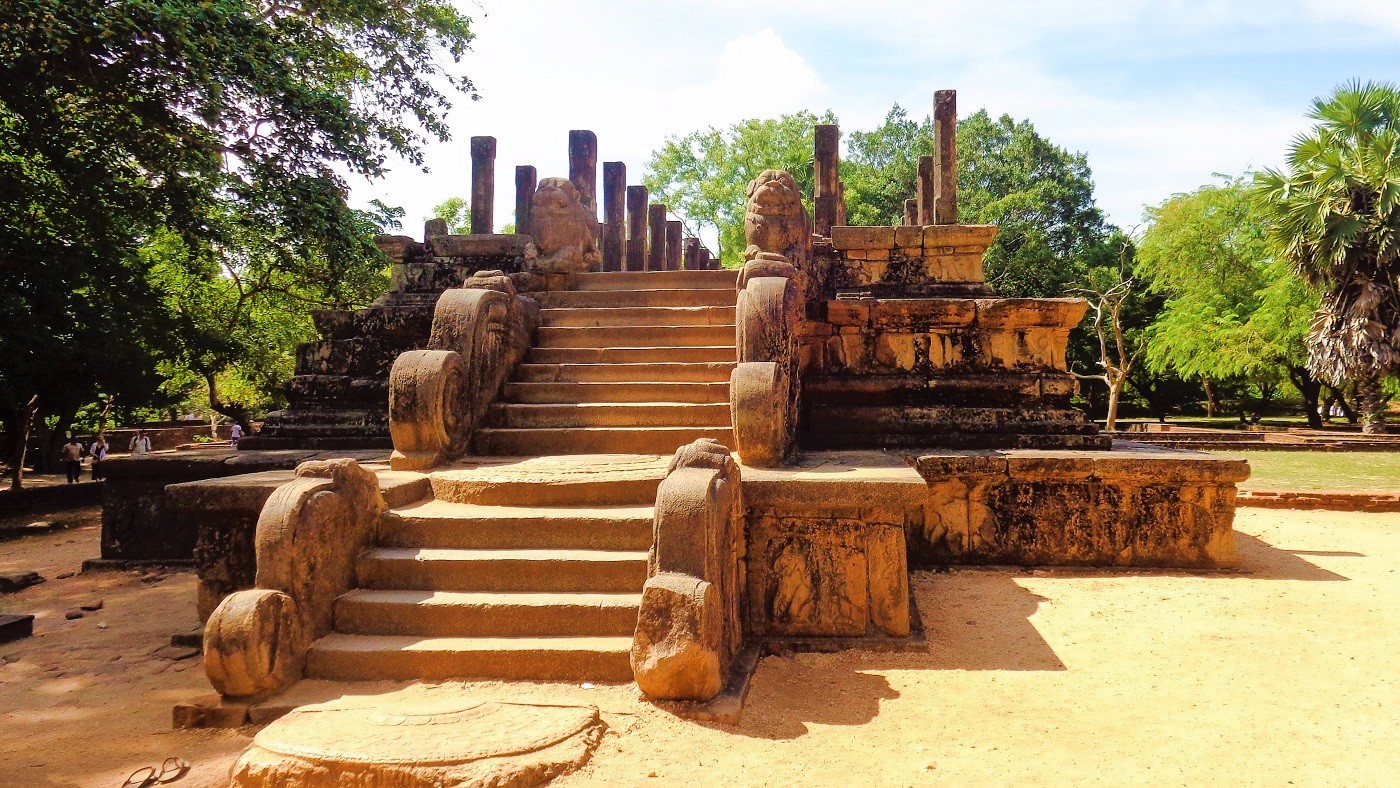 Pothgul Viharaya is the oldest library complex found in Sri Lanka. Meaning of the ‘Pothgul’ is ‘a place to store books’ and meaning of the ‘Viharaya’ is ‘a temple’. This was built by King Parakramabahu. Circular structure which can see in the middle was the main library. Both main library and the circular shape roof were built out of brick. Remaining of four small stupas at the four corners of the floor and remaining of several buildings where used as residential cells for Buddhist monks also can be seen here. Designing of Pothgul Viharaya is mostly closer to the old temples which found in Cambodia. 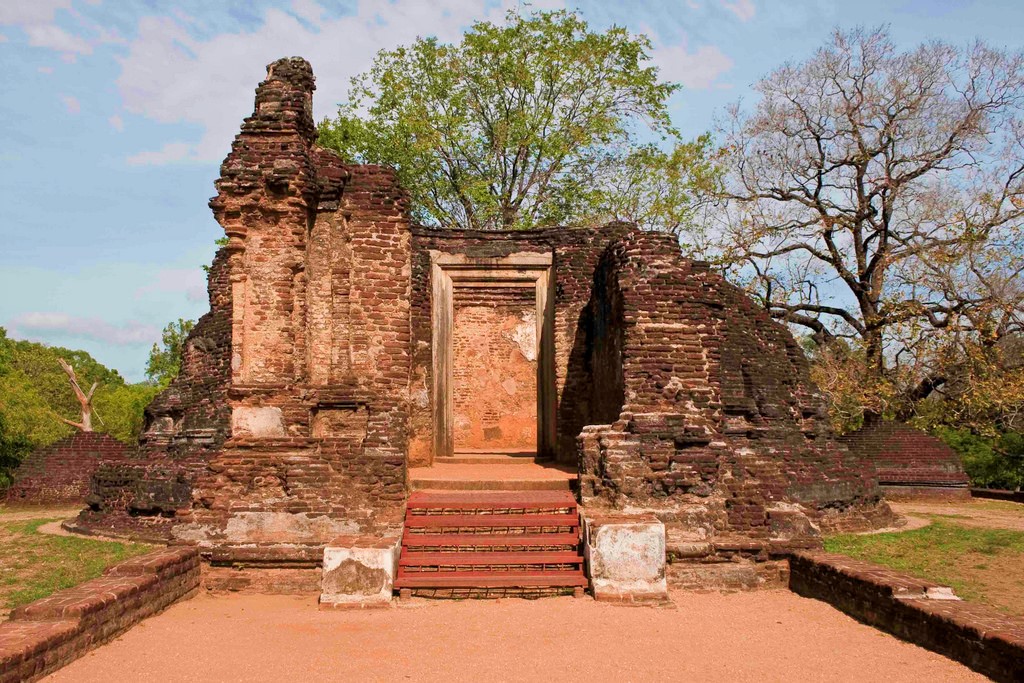 This Buddhist monastery had been built by Sinhalese people by 12th century AD within the rock formation. It is said by the 12th century 500 monks had been resided here. King Pandukabhaya also lived here for a short period of time in the 4th century. 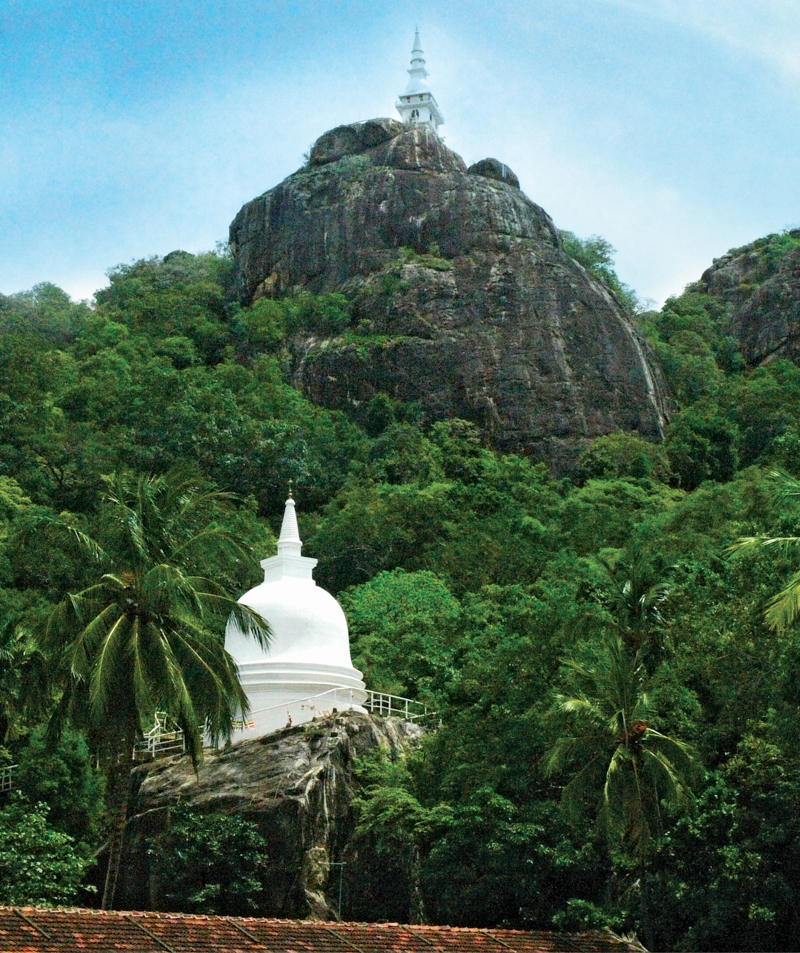